100 days of this school year have come and gone.  It’s amazing how fast every year passes by – I’m always in awe at how much the firsties have learned and changed at this point in the year.  Here’s a little recap of how we spent our 100th day of first grade!

The firsties each made and wore a 100th day t-shirt, complete with 100 items.  Here they are!

Anthony made a cape using 100 bingo dauber dots. We called him Super Anthony all day!  🙂 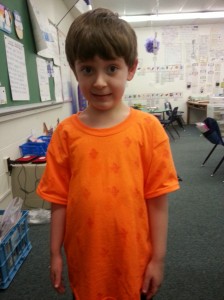 Kayla ironed on 100 patches!  They were so cool!

James made 100 tally marks on his shirt. Love the math connection! 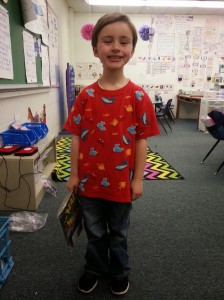 Kaylee really had her eye on us with this one.  Ha!

Jehlani fluttered through the day as a butterfly, created using 100 buttons!

Bryce’s shirt of 100 smileys and silly faces had us giggling all day long!

Lena’s shirt (which I somehow missed getting a picture of, dagnabbit!) illustrated 100 Ninja Turtles. Here’s the back – in the chapel crowd!  It was super cute!

We shared our shirts during Morning Meeting.  Everyone got to see what everyone else made.  We loved how different they all were!

After chapel and a little reader’s workshop, we wrote about what we thought we’d be like if we were 100 years old.  Their ideas ranged from the need for hearing aides and false teeth, service dogs and stair lifts, to the probability that they might already be dead by then (my little realists).  They all included their possible physical attributes, like wrinkles and gray hair. They then drew awesome illustrations for their stories. Look for them in the hallway next week! I’m running out of wall space by the 1st grade room, so you might have to check down another hallway.

We combined our class with kindergarten for P.E., where we counted how many times we could recite the alphabet, count to 10, stand up and sit back down, hop, blink, and clap in 100 seconds. They very quickly realized how long 100 seconds really is!  Kiddos who started out clapping really fast were clapping much more slowly by the end. All that movement was exhausting!

In math, children predicted how far 100 steps would take them. They wrote their predictions and illustrated them. Then they started at the classroom door and actually counted out 100 steps to see where they really ended up. Many friends were surprised that they didn’t get as far as they expected, while some had made predictions that were exactly right!  Yay estimation!

Check out the Archives